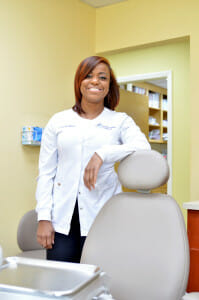 On any given day, Premier Smiles of Charlotte dental office is buzzing with customers ready to perfect their pearly whites. The practice is owned and operated by 35-year-old Courtney Edwards, and services all ages. Dr. Edwards, a native of Memphis, TN, was ambitious from the start. “I always knew I wanted to be called doctor, but I didn’t want it to be in the medical field. I can only deal with small amounts of blood and bodily fluids,” confesses Dr. Edwards. “My initial goal was to be in research and win the Nobel Prize for studying hypertension. The research I conducted was on rats and after a while, I grew tired of that.” Being a scientist always came natural to Dr. Edwards. In school she gravitated towards science clubs, science projects, and anything closely related. At one point she explored the life of a Marine Biologist and set out to ‘save the turtles.’ Knowing that young girls don’t typically follow that path, she suggests fueling even the slightest interests by seeking out educational programs, science clubs, books, and even talking to a counselor or teacher about how to forge ahead. After realizing her passion wasn’t in research, Dr. Edwards burst through the doors of Meharry Medical College in Nashville and declared, “I want to be a doctor. Tell me what to do.” Through laughter, the administrators helped her explore other areas, and soon she settled on dentistry. What she didn’t know was deciding on a specialty and being accepted to the program were fairly easy. “I started my journey at Tennessee State University with many hurdles, even sleeping in the car for a day. I got my refund check the next day, cashed it, and found an apartment that day. After that, I found a Salvation Army and bought a small television and a radio, and found a mattress in the newspaper. Over time, I was able to afford other things, but at that moment, that was all I needed,” she says. In 2008, while still in dental school, the soon to be doctor saw a flyer hanging in an elevator advertising an internship with (the late) Dr. Spurgeon Webber, Jr., a Charlotte dentist, philanthropist, and mentor to many. She immediately snatched the paper down (to avoid someone else seeing it) and rushed to call him. Within weeks, she made her first trip to the Queen City and convinced Dr. Webber to hold the position for almost two years. In a field dominated by men, being a female dentist can be a trying experience. Confidence, determination, and skill are must-haves upon entrance. There is no doubt that Dr. Edwards walks tall, has a plan, and aims to be the best. “Many of the men in my field automatically think I may not be as smart because I’m a woman. Sometimes they feel like they had to ‘show me the ropes’. It happened when I purchased this practice. Some assumed I didn’t know what I was doing. I felt like I had to prove myself.” In 2014, Dr. Edwards purchased Premier Smiles without it being for sale. She had a vision of owning her own practice and persuaded the previous owner to sell it to her. Within two months, she was a business owner. “I absolutely love what I do. I couldn’t see myself doing anything else.” She beams with pride speaking about the personal joys of her profession. “I love being able to take people’s pain away and having a solution to their problem. I see so many different scenarios walk through my doors. Some have experienced trauma and even child abuse. I ask God to use me as a vessel and allow me to heal and maybe that will bring them closer to him.” Dr. Edwards gets her spiritual guidance at Ebenezer Baptist Church under the direction of Dr. Leonzo Lynch and is excited for the day that she finishes her new member classes and can officially join. Volunteering is the first thing she wants to do upon receiving her member status. Outside of providing professional services, Dr. Edwards doesn’t shy away from community involvement. She was a child who grew up benefitting from state assistance so she understands the lack of knowledge about health. Every year she donates over 500 toothbrush kits to schools, churches, and other organizations who may need them. “Sometimes I’ll take several kits to a truck stop and pass them out to the truck drivers who I know are on the road 18 hours a day.” Her most prized act of kindness is randomly selecting one patient to makeover each year. There is no contest, no drawing, and you can’t register for this gift. If she sees a need, she fulfills it, no matter the cost. A little known fact about the newly single southern girl – Prior to purchasing her practice, she dedicated herself to getting in shape, so much, that she became a bodybuilder. “I was 190 lbs., so a friend and I hired MJ Fox, a personal trainer here in Charlotte. She was able to get both of us in amazing shape within 12 weeks.” I was surprised hearing this, though I shouldn’t have been; Dr. Edwards is the epitome of dedication. When she sets her mind to a cause, whether personal or professional, she does everything in her power to attain it. And she doesn’t mind helping others with their personal goals as well. The eldest of three children has been a speaker at schools and extracurricular programs across the city for several years. Having a nurse for a mother, and an engineer for a sister, helps keep her skills sharp, and her feet grounded. Science apparently runs through her veins and it sounds like she wouldn’t have it any other way.
RealSelf Q&A with Sneed MediSpa and Wellness